A downloadable game for Windows

Remake of Castlevania in unreal, that i've been hammering away at for the past.. well a year now.

finally got a C&D from Konami.
they've allowed me to keep the files up for now, but all development and updates must be ceased.
there's a small glimmer of hope though, Jay from Konami UK will do what he can to see if it's possible to get an official license.

fixed dogs getting stuck when jumping.

fixed climbing issues on some blocks

improved heavy fall stun effect, to make it more like the original.

did more adjusting of light on level 1.

fixed some pickup sounds that had gotten broken due to bug with unreal parent->child relationship.

adjusted lights on candles, which should improve framerate.

created a normal map for the bossbat on level 1.

bat should no longer pass through wall on level 1.

adjusted the wallchicken wall, it should now break like in the original.

adjusted platform movement. they now move on a sine curve like the original.

the culprit was dynamic lights from particle effects on chandeliers on the roof.

i made those lights static, and turned off the particle effects, and i'm now able to run those areas at over 30 fps on my laptop with a geforce GTX 860M with no loss of visual fidelity. the middle section of level 1 however has temporarily become a bit of a performance hog however, due to some testing i'm doing with deferred decals, so the laptop is struggling with those areas.

i'll probably have to bake down those areas into textures instead or something. whip control has also been improved quite a bit. but i think i'll work some more on that still. level 1 has been shortened a bit to conform more with the originals size. particularly the begin area was too long. i've also brightened up a few spots here and there, and proofed myself from an unreal bug which causes child blueprints to sometimes reset all values for no reason.

oh and i added a 32-bit download. no guarantees that it will run well on such old machines though.

to play, simply unzip and click on the icon that says "Castlevania1"

honestly I'm surprised & pleased Konami allowed you to keep the work done up, it's actually quite magnanimous of them.

nice game, the levelmap is exactly like in the original! But after a while I couldnt throw the axe. pressing "r" dont throw the axe, only a few times

Unbelievable. Framerate is unbelievably choppy on my Nokia N-Gage. Tried playing it on my parents' Gateway 2000 and had similar results. WTF?

My dude... what on earth possessed you to try using a nokia n-gage to play this?  This is a fan made game in unreal engine, it's not gonna be well optimized.  It also got a C&D like 6 years ago, they're not gonna update or add anything at this point.

Neither example given is built on the Unreal Engine but even so the point here is; r/woooosh

did you ever get the license to complete working on the game? also is there a way to use a controller?

Super rad! Fingers crossed for licensing. And a Mac port. :-)

Brilliant and beautiful. Revived the game in a way like a true remaster and I hope you can sign with Konami to have copyrights! Good luck!

wait till inreal 5 gets out. it will be perfect

group here that uses unreal engine 4 that just did great things at an expo last week open to help :)

The game remake looks great. It has an appealing look and the gameplay is fine and fluid. I would work on improving the character's animation and some of creature animations (I would recommend to hire a professional animator). Other than that it looks pretty cool.

It's a pitty about Konami. This is my advice: keep the game structure and just rebranch the project (change the name of the game and the characters names, etc) and you will be able to release it even comercially.

Here is a short video we made while playing:

Keep up the good work!!!
Reply
FamilyGuy03954 years ago

Are you still working on this behind the scenes?

well, i've been messing around with something different. but similar.

maybe i'll release that next halloween if it's done.

If you ever get that license, would you finish this game?

oh yes, i'd love to finish this game.

Came back to play this 'demo' again and I still love it. I really wish Konami would try and win back their fans by allowing you to continue development on this. This is a project I'd gladly donate towards.

While it's a shame your work was halted, I applaud what you did manage to accomplish. It's a beauty of a remake and I, personally, would love to see other classics be given the Unreal treatment. I'm not even a big Castlevania fan and this was super nice. Good job.

is there anyway for this to work on an android tablet? or anyway i can get this game for someone whos not a very good software person? ill even pay

What happened with Konami and this game? Did you get the license or no.

Game will not install for me. dont know why. running Win10 with 12Gig of ram and 8550 Mobile Graphics

is there any news about the C&D,,, Konomi is like that I hear. Much like Nintendo they want eveything to be theirs forever, even if its abandoned or statis-ware

So what's the status on that Konami deal? Did Jay help you?

Just now i came up this game. Gotta say, it looks great and plays quite fair being under development. Runs smooth framerate btw, and i can play with my xbox360 controller for windows just fine, only stairs gives some troubles. Did you know that the music is loud, as loud it almost breaks itself? Maybe too much amped or something. None the less, this game looks nice and plays nice, kudos! PS. Its too shame, that konami seized this, i was looking forward to see the finished game. Oh well, maybe someday?

Konami requires the Castlevania name only be used on pachinko machines. #FucKonami

I love it and really hope Konami stops the C&D and help the developer (dejawolf) to finish the game, I love Castelvania games from the NES and SNES and the Game Boy but on the PC they have never felt as fun.

This game is hitting all the marks, The animation has a kind of macabre stop monition feeling, the sound and music is very good and the lighting, the colors and effects are very lush and in the correct style for the franchise. 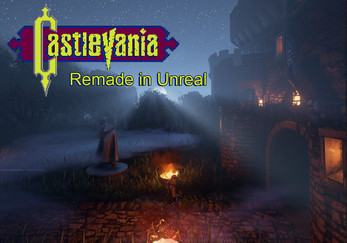 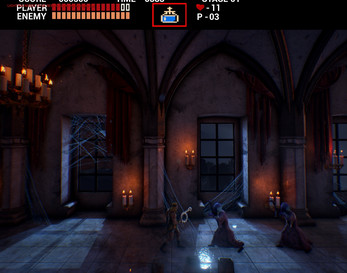